Posts Tagged With: Little House on the Prairie

Posted on April 29, 2014 by thecannypreserver

1.  Most importantly, we found out we’re expecting another baby!  I alluded to a big surprise in my last post, and had meant to update way sooner, so for those of you who were waiting with baited breath (ha!), I’m sorry!  I’m due in early September, and I have a whole separate post about what gender this little one is coming up! 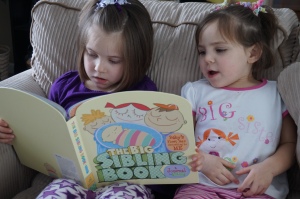 2.  I stopped babysitting.  That was a hard decision to make, but it all kind of unfolded very quickly and smoothly…kind of like what happens when you start listening to God and obeying Him.  I was watching three little ones in addition to raising my own two girls, and then all three of us mamas got pregnant, which meant by the time my baby came, I’d have one 6-year-old, three 3-year-olds, one 2-year-old, and three infants.  I was going to hire my mother-in-law to come help me several hours a day, but even if that would have worked out (which it wasn’t go to) I started realizing that the hours she wasn’t there was going to be extremely hard on me.  So I asked one family to find another sitter (that was a hard decision!) and shortly after that the other mama needed to quit her job for the health of her pregnancy and decided she was going to stay home when her third arrived.  So it was an abrupt end to babysitting for me, but it has worked out nicely, actually!  I decided not to get back into it, because I’ve been enjoying it just being me and my girls again… plus I’m not superwoman… I think having a newborn and starting homeschooling 1st grade in the fall is going to be enough for my brain to handle!

This is what my house looked like all winter

A rare day “warm enough” to venture out

It was pretty fun to have our own sledding hill!

3.  I don’t know about you all, but this winter took a toll on me.  I think the combination of not being able to take all the kids outside hardly at all, nor being able to leave my house…nor really WANTING to leave in the frigid temps…has opened my eyes to just how amazing this era is that we live in. I have a whole new appreciation for Laura Ingalls Wilder and the rest of the pioneers.

Can you imagine experiencing a winter like ours without whole-house heating?  Can you imagine having to try to feed and water your livestock during a blizzard?  Just trekking out to give my poor chickens water twice a day was brutal enough!  Can you imagine not seeing another soul outside your family for an entire winter?  Seeing my daffodils push stubbornly through snow this spring brought tears of sublime joy to my eyes.  I imagine Mary and Laura Ingalls felt that way, too.  Sending my children outside to run and play and GET OUT OF MY HAIR and opening the kitchen window to feel the breeze while I did dishes for the first time this spring made me close my eyes in ecstasy.  I imagine Caroline Ingalls felt that way, too.  I think we can all stand united, from this century to the ones long past, and give a big cheer for SPRING! 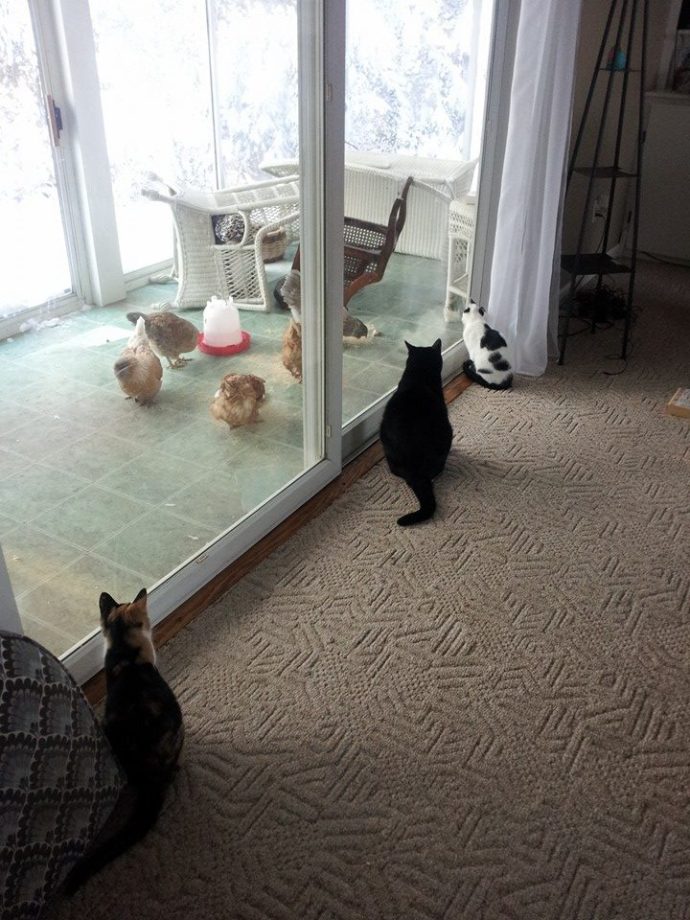 Kitty TV! Cider on the left, Toopweets, and Pancake on the right.

4.  My chickens.  My poor, poor chickens!  I had a big learning curve with poulty this horrid winter.  For starters, I realized that even though we had one day with a -40 windchill, and FEET of snow out there, the hens could survive.  It was totally unnecessary to bring them onto my back porch to dirty it up with a shocking amount of poo in 12 hours.  It helped me sleep better, anyway.  Despite all my babying, the poor girls were picked off one and two at a time over the winter.  Desperation drove predators to this easy meal, and one clever hunter even figured out how to get into the coop!  The last two were likely carried off by coyotes…after the coop raid they were too scared to go back to the coop, so they hunkered down in front of the house for about a week before they were taken.  So, sadly, I am chickenless right now.  I haven’t replaced them yet because I’d like to sell my coop and get a different style.  I’m also torn between getting hens or chicks…votes? 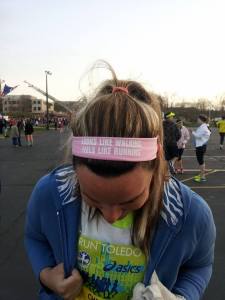 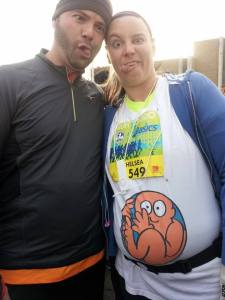 My big brother, Zach, and me. Typical shot of us.

5.  Over the weekend I ran a half marathon!  And by ran, I mean walked. 🙂  But still, walking 13.1 miles whilst 21 weeks pregnant is something to be proud of, which is why it’s a bullet point here.  It took me nearly 4 hours, but I had a book on my iPod and I had a good time!

Where is the next porta-potty?? Baby on the bladder, people!!

I’m still a little sore, which tells me I need to do more walking than I have been doing!  I’d been training for this half and had intended on running it, but I ran 10 miles at 19 weeks and between then there was a lot of growth happening with baby and it just was not comfortable to run anymore.  But I still got to cheese over the finish line and get lots of bragging rights!

6.  This morning my oldest, Cozy, saw something on TV about making “jelly” and asked if we could make some.  We hardly ever eat jelly or jam…like, seriously, one jar can last a whole year in my house.  Consequently, I never bother to make it because it would expire long before we got to it.  But when you have a love for cooking and preserving that has been ignored for months and your darling blue-eyed 6-year-old asks you to teach her how to preserve… “Sure!  Sounds like fun!”  So I found a recipe for a quick and easy strawberry freezer jam and we had a lot of fun making it!  The girls washed the berries for me and then helped me mash them: 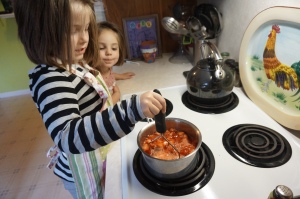 We added gelatin instead of pectin because I have loads of it:

Letting it cool before sticking it in the freezer/refrigerator:

Yum!  It’s a little runnier than I’d like jam to be, but the flavor is really good!  I’m ok with the runny consistency because I’ll use this in my yogurt way sooner than we’ll eat it on toast, so it will actually be easier to mix in for me.  But if you want this to have a better spreading consistency, I would either switch to pectin, or double the gelatin amount.

1. In medium saucepan heat strawberries, lemon juice and sugar, about 5 minutes.  Crush (I used an immersion blender after the girls finished having fun smooshing).  Bring to a boil, stirring constantly, 3 minutes.

2. In a small bowl, sprinkle gelatin over cold water.  Let set 1 minute. Add to berry mixture and heat, stirring until gelatin is dissolved, about 3 minutes.

Jam will keep for one month in the refrigerator and 1+ years in the freezer. 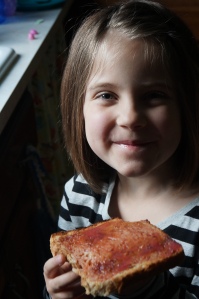 So, after I finished spreading the jam onto the toast, Cozy says in a disappointed tone, “I thought we were making jelly!”  This confused me, because while I know my kid is smart, there is NO WAY she knows the difference between jelly and jam, so I said, “Huh?  This is jelly!”  I half expected her to school me on what exactly constitutes jelly vs. jam, but she just said again, “No, I meant JELLY.  This is not jelly.”  And then it hit me:  she wanted to make Jell-O, not jelly!  Ha ha!  Poor kid!  Life is rough when your vocabulary is still young!

It’s good to be back!